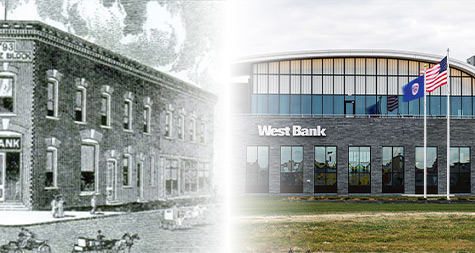 Back to About Us

Since 1893 — the same year the City of West Des Moines was founded — West Bank has built a reputation for earning our customers’ trust, while continuing to be recognized as one of the best banks in America.

We cherish the strong relationships we have built with individuals, families and businesses who value our dedication to community banking. We work hard to develop customized banking solutions for our customers, giving them the resources and freedom, they need to prosper in the thriving communities we serve.

With branches in Iowa and Minnesota, we are extremely proud of the work we do — both at the bank and in the community. Our loan portfolio is growing, and we have strong credit quality. But by far, the biggest measurement of our success is our people, who are dedicated to making meaningful contributions to the places we live and work.

We’ve achieved a lot in our long history of community banking, but some things will never change: our commitment to treating every customer with dignity and respect, and our never-ending pursuit of improving the places we proudly call home. Together, we are West Bank strong.

In 1893, Herman and Anna Raaz began issuing loans to families and small businesses in the now-historic Valley Junction. Originally named First Valley Junction Savings Bank, West Bank gave the little railroad town the financial boost it needed to grow into one of the original settlements in West Des Moines.

Born in 1858 in Elmira, New York, Herman Raaz left home when he was 20 years old to pursue new opportunities in the burgeoning Midwest. Over the course of several years, he worked as a cigar maker in Jefferson, Iowa, clothing store manager in Rockwell City and Centerville and banker in Rippey.

In 1883, he married Anna Craig, the daughter of Scottish immigrants who worked an unbroken plot of Mitchellville prairie into highly productive and valuable farmland. No stranger to hard work, the new Mrs. Raaz proved to be an exceptional partner at home and in business.

The two moved to Valley Junction and founded what is now known as West Bank in 1893.

Mrs. Raaz’s aptitude for banking gained her an impressive and respected reputation across the Midwest. As the first female banker in Iowa, she was renowned for recognizing the faces and signatures of virtually every businessman and employee in Valley Junction. Legend has it she never cashed a check that was not genuine during her 15 years as cashier.

In addition to managing the bank, Mr. Raaz was also very involved in other aspects of life in the small town. He helped organize the local independent school district, of which he served as treasurer for 14 years, was involved in several fraternal organizations and was well recognized for his philanthropic work.

The story of how Mr. and Mrs. Raaz enriched their community has become ingrained in the West Bank identity, and we will continue to conduct business according to the values they established over 125 years ago.